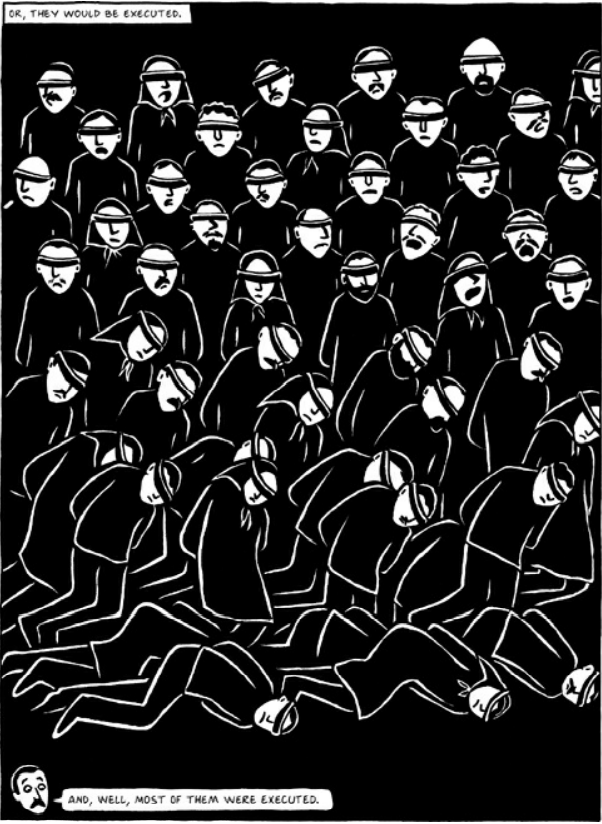 Marjane Satrapi’s graphic novel Persepolis is a story about revolution, violence, and cultural differences. However, it is not the work of some idealistic revolutionary. There is no Greater Political Good to be achieved with a few necessary sacrifices. There are no perfect heroes who will rise against oppression, nor monolithic tyrannical masters. Its focus is unambiguously the humans within it all, and the messy, confusing, terrible, and wonderful circumstances of their lives.

The following scene is a particularly striking example. Marjane has just returned to Iraq after a long stay in Europe, and so much has changed. Her father is talking about the conflicts between Iran and Iraq, and what happened to the anti-fundamentalist revolutionaries who entered Iran at the wrong place and time. The panels leading up to this scene are simple and text-heavy, making the impact of its dark and painful imagery even greater.

Once readers are drawn in by this sudden shift, the details on the page practically force them to hold their attention to it for as long as they can. Marjane’s father’s face is relegated to a small picture in the bottom left corner so as not to take attention away from the revolutionaries. To even further emphasize their humanity and the suffering they endured, the revolutionaries are all given distinct and recognizable faces. This makes their blindfolds (for execution) and uniform black clothes so jarring in comparison, as it shows that their individual identities and lives did not matter to the regime - only that they were collectively a threat.

In addition, Marjane often recalls moments throughout the story in which other people were trivial or facetious about topics that truly bothered her. This page is an example of that, except readers are instead made to experience it through their own eyes. The image is terrible (in the “pained” sense) and thought-provoking, but Marjane’s father’s nonchalant expression and casual demeanor at the bottom create an uncomfortable sense of bathos. Through this, Satrapi subtly pushes readers to empathize both with the revolutionaries and with Marjane’s feelings of discomfort as she hears about what happened while she was away.

With this, Marjane has fully returned to Iran - not just physically, but mentally and culturally. She is once again deeply affected by the pace at which her country is changing, and the violence and fear to which she has grown up closely are much less alien to her than everything she saw in Europe.